Applewood Helps Children of Adams County for Next Christmas

Applewood Helps Children of Adams County for Next Christmas 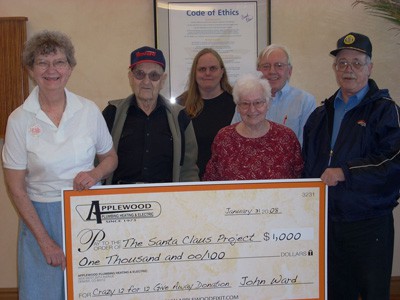 Colorado has a child poverty rate of 15.3 percent and in Adams County alone, there are 128,156 households with children living in poverty – numbers that have steadily increased each year. For these families, Christmas is not high on the priority list. This year Applewood Plumbing Heating & Electric is making February about continuing Christmas rather than celebrating Valentines’ Day as they award $1,000 to the Adams County Santa Claus Shop, Inc., as the January “Crazy 12 in 12 Giveaway” winner.

Owner John Ward presented the head of the program, Sarajane Anderson, with the $1,000 check on February 18. Anderson says the money will be put toward the purchase of coloring books and board games, items that are not donated in mass amounts, but are a favorite among the children. “We always need more board games, they are what the children want the most,” Anderson said.

Applewood helped more than 30 organizations through their “Crazy 12 in 12 Giveaway” campaign in 2007. “It’s wonderful to start off our third year of the Giveaway with such a worthy organization,” said Ward. “You don’t often get to play Santa Claus in February, but whenever we can brighten a child’s life it is worth while,” he said.

The Adams County Santa Claus Shop, Inc., was founded in 1977. The year-round community project provides free toys and gifts to needy children living in Adams County and is staffed entirely by volunteers. “It is good people like Applewood Plumbing Heating & Electric that really make a difference in the success of this project,” Anderson said.

On average, the Adams County Santa Claus Shop helps 1200 families per year, which averages 4100 children who receive toys and other gifts for Christmas. “The children don’t care if the toys are new or used, they are all new to them,” stated Anderson.

The program accepts donations throughout the year and gives away the toys during the months of October, November and December. Thanks to the help from the volunteers and Applewood Plumbing Heating & Electric, more Adams County children will have a merrier Christmas this year.