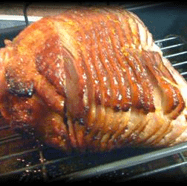 Bake for an additional 20 to 30 minutes, or until glaze is bubbly. Allow the ham to rest for 15 to 20 minutes before carving. Serve with hot Peach-Ginger sauce.