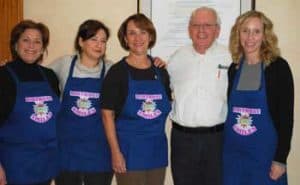 There are more than 3,900 homeless people in Denver with 60 percent of that population being families with children.

Applewood Plumbing Heating & Electric (www.ApplewoodFixIt.com) gave $1,000 to the Birthday Smiles program, as the “Caring Community Giveaway” January winner. Birthday Smiles is a part of the nonprofit Precious Child, an organization that reaches out to Denver’s homeless population and hosts birthday parties for children living in shelters.

“Shelter life is a very restraining and unsettling environment,” said Rise Justice, director of Birthday Smiles. “These children have no stability in their lives and a birthday is a huge event to a child. The parties we put on give them something to look forward to and let them have that special birthday memory.” One party a month is put on at Samaritan House shelter for all the kids whose birthdays fall in that particular month.

“I am grateful that Applewood is fortunate enough to be able to support organizations that give kids a birthday memory,” said John Ward, president of Applewood Plumbing Heating & Electric. “As a business that works to make homes better, we have a responsibility to help those who may have stumbled upon some bad luck, especially in the difficult times that we’re all experiencing.”

The economic downturn caused many people to lose their homes. According to Birthday Smiles, Denver area shelters have seen a 15 percent increase in demand over the past two years and haven’t had a vacant room in several months. This increase came largely from families who found themselves homeless for the first time.

“The most heartwarming part about being a part of Birthday Smiles is working with the community,” Justice said. Along with help from businesses like Applewood, local performers, scientists, and artists volunteer their time to participate in the parties to make them a positive, educational experience.

The growing homeless population is a large concern for Birthday Smiles. Families can stay at the Samaritan House shelter for up to four months, and many stay the entire time. An average of 40 children are at the shelter at any given time. After their stay at the shelter, some families are given vouchers to stay at motels, which present new challenges for Birthday Smiles. According to the program, this is a larger problem that Denver faces because these motels are in dangerous neighborhoods and create an even harder environment for these children to grow up in. The program is looking into ways to reach these children and the funding from Applewood will help.

Applewood Plumbing Heating & Electric has served the Denver/Boulder Metro area for more than 37 years and is proud to have been named the 2009 winner of the Better Business Bureau’s Torch Award for Marketplace Trust in the Large Business category. The company was also recently rated eighth in the nation’s top 10 service companies by its customers. They are honored to have achieved the Nexstar Network Select Service Designation and to have been named 2007 City of Golden Rotary Ethics in Business Award winner.

Find a Service Area Near You