We’re open 6am to 10pm 7 days a week to serve you at your convenience with no overtime charges.

A GFCI outlet is an electrical outlet which is designed to protect people from deadly electric shock. In addition to preventing electrocution, GFCI outlets can also reduce the risk of house fires caused by electrical problems, and reduce damage to appliances caused by faulty electrical circuits. These outlets use ground fault circuit interrupter (GFCI or GFI) technology; it is also possible to install a GFCI at the breaker box, or to use a portable GFCI device.

How Do GFCI Outlets Work?

The way in which these outlets work is rather ingenious. The GFCI outlet monitors the flow of energy through the circuit. If an imbalance between the “hot” and “neutral” poles in the circuit occurs, indicating that there is a ground fault, the outlet trips off. Ground faults can be caused by a wide variety of things, including a human being touching an energized part of the circuit, and this can be deadly. A classic example of a ground fault which has been utilized as a plot device in numerous films is a hair dryer which falls into the bathtub, turning the water in the tub into part of the electrical circuit and electrocuting the unfortunate occupant.

The design of a GFCI outlet includes two small buttons labeled “test” and “reset.” People with GFCI outlets should make a habit of regularly testing them to confirm that they are working properly. This can be done by plugging a lamp into the outlet, turning the lamp on, and hitting the test button. The lamp should go out, and the reset button should pop out, allowing people to turn the outlet back on.

GFCI outlets are mandated by law in many regions of the world in locations like bathrooms, garages, kitchens, crawl spaces, unfinished basements, and outdoor outlets. While people are encouraged to install them everywhere for safety, these areas are the locations of most concern, because they are prone to the development of ground faults. 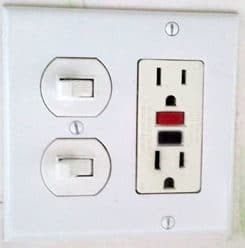 If a GFCI electrical outlet is tripped, people should ascertain why the outlet cut off the supply of power before resetting it. For example, if a kitchen outlet suddenly stops working, it might be because a wire inside the outlet is coming into contact with something which is causing a ground fault, which means that people would not necessarily be aware of the fault. An electrician can run diagnostics to determine why the outlet turned off, and reset or replace the outlet as necessary.

People should be aware that they can still be shocked by a ground fault associated with a GFCI outlet. The outlet will detect the imbalance in energy quickly enough to prevent a severe or fatal shock, but the victim will still experience a shock in the fraction of a second it takes for a GFCI outlet to respond to a ground fault.

Applewood’s licensed electricians can help get your home up to code by installing GFCI outlets in areas where you need them – or by replacing outlets that are no longer operating correctly. Call 303-785-2000 today!