Forever. For everyone who has ever lost someone, forever is a devastating amount of time. For parents who have lost children to suicide, forever is horrific. Applewood Plumbing Heating & Electric is awarding Yellow Ribbon Foundation $1000 to help end teen suicide as the August 2015 Caring Community Giveaway winner. 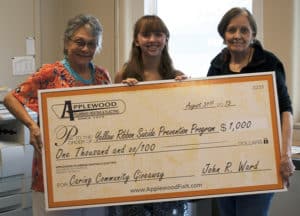 “Suicide has an ugly stigma, making people avoid the subject. But kids need information so they will know there are other options,” said John Ward, Applewood Plumbing Heating & Electric president.

Dale and Dar Emme began the Yellow Ribbon Foundation in 1995 after their youngest son, Mike, committed suicide the previous fall. The letters they receive attest to the lives they have affected since.

“We have more than 65,000 letters in our files from people who Yellow Ribbon has touched,” Dale Emme, executive director of the Yellow Ribbon Foundation, gushed. “One 12 year old girl wrote to tell us after her sixth suicide attempt she saw our card and found help.”

The phrase “It’s ok to ask 4 help” was coined from those first nights immediately following Mike’s death and continue to appear on Yellow Ribbon’s prevention cards. Mike was well known for his restored 1968 bright yellow Mustang, inspiring the yellow ribbons pinned to each card.

Depression is the most common factor that leads individuals to suicide. Of the 41,000 suicides annually in the U.S., Colorado’s suicide rates are within the top 10. Additionally, among 15-24 year olds, suicide is the third leading cause of death, according to the Center for Disease Control.

“We didn’t know what to do with our lives after this happened, but we wanted to make sure this doesn’t happen to anyone else,” said Emme.

Today, chapters of the Yellow Ribbon Foundation exist in every state and more than 47 countries. Yellow Ribbon’s goal is to make suicide prevention accessible to everyone. Their curriculum targets middle school and high school students to seek help if they or a friend is contemplating suicide.

For more information on the Yellow Ribbon Foundation, click here.